This famous pokie hailing from the Norse lands with godlike power was so popular it merited a sequel. Based along a mythological storyline of Thor and the other Norse gods, the original five reel game had a wonderful scatter square which gave some nice free spins, but now in the newer sequel offers even better features.

The original released by Microgaming in 2003 made way for Thunderstruck II and it’s many features.

Thor Symbol- The God of Thunder acts as a 2x Multiplier and as a Wild Symbol (except when the Rams show) It shows frequently for huge wins!

Ram Symbol- This scatter symbol works in groups of 2,3,4, or 5, giving huge multipliers when they hit. If 3 or more show on the reels, player will receive a bonus feature of 15 free spins!

Bonus Game- There is an extra gamble feature after every win that the player can choose to use or not. The game goes to a new screen, where a playing card is displayed for extra wins. The player chooses if they want a certain suit and color, and the card is revealed. Getting the right color, and you double your prize coins. Get the right suit, and you get four times your winnings.

More Winnings- The original Thunderstruck offered the normal pokie paylines, where the player had to line up symbols on that particular line to receive their win. The new Thunderstruck II takes paylines out of the equation, giving players 243 total ways of winning, given all the combinations. This gives the player a better chance of victory, making this god like game even more epic.

The Great Hall of Spins- When the player receives three hammer symbols, they enter the Hall of Spins. After numerous entries, they will eventually enter the chambers of the various gods, giving up even more free spins and awesome bonuses.

The Valkyrie Symbols- These angels of Valhalla give a wonderful 5x Multiplier and give 10 free spins when three or more show on the reels.

The Loki Symbols- The trickster from the north brings Wilds with him, plus 15 free spins.

The Odin Symbols- Unlock the Odins, and receive from the God of Wisdom 20 free spins, plus random multipliers.

The Wild Storm- This great wild feature will sometimes take the reels and turn them into wilds, allowing for numerous wins for the battle strong. 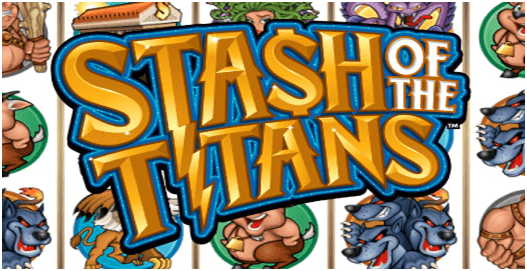 STASH OF THE TITANS